We won’t stop until UP CM resigns: AISA

Amid ongoing protests against Hathra’s rape case, the portrait of UP Prime Minister Yogi Adityanath was burned in New Delhi on Monday, and protesters vowed to continue until his resignation.

Three days after a massive protest in Jantar Mantar in New Delhi demanding the resignation of UP Prime Minister Yogi Adityanath, another protest took place at the same place where civil society activists, student organizations, women’s organizations and concerned citizens gathered around to continue the protest. The activists, led by the All India Student Association (AISA), a student organization, also burned Adityanath’s portrait. They also sang slogans against him and his faulty rules in the most populous state in the country. The protesters said they would continue the movement until their central demand for Adityanath’s resignation is met.

Protesters said violence against women, minorities and the Dalits has increased since Adityanath took command after the last general election in 2017.

Their claims were supported by data released by the National Crime Record Bureau (NCRB), according to which India reported 4,05,861 cases of crimes against women in 2019, and Uttar Pradesh topped the list with 59,853 incidents. Of the total rape cases reported in the country last year, 11 were Dalit victims. This emerges from NCRB’s annual report, Crimes in India 2019, published on October 5th. Uttar Pradesh also had the highest number of crimes against girls under the POCSO law with 7,444 cases.

AISA National Executive Member Madhurima Kundu, who led the protest in Jantar Mantar on Monday, spoke to Media India Group about the aim, scope and demands of the protest.

What are your demands? 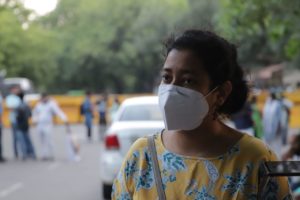 Do you see or expect these protests to achieve their goal?

In the past, student protests have overthrown governments and we are determined to keep our protest going until our demands are met. The issues of gender and caste in India are integrated. Violence is intensified under the current administration. In this incident, and similar incidents before, we saw that the government protected the rapist instead of the victim. We have never seen anything like this, with the entire machinery of the police and judiciary trying to protect the guilty. We saw the government protecting KuldeepSengar in the case of the rape in Unnao. In Kathuacase we saw the BJP gather in support of the guilty.

Even the special task force formed after the Hathras fall was made up of people from the Thakur community. It was almost a special “Thakur force” to justify the violence or to exonerate the people involved in the violence.

Where do you protest except in Delhi and who is part of the protest?

Our protests are taking place across the country. Members of our organization protested in Lucknow, Varanasi, Kolkata, Assam, Rajasthan and many other states. As the state capital, Delhi remains the center of all protests.

Various student organizations such as the All India Student Federation (AISF), KYS (KrantikariYuvaSangathan), many women’s organizations, trade unions, members of various political parties and people from civil society take part in the protest. It becomes important that people of all sections come together as the need of the hour is to speak against the violence and the government that perpetuates it. Even in the recent case of the demolition of the Babri Mosque, the verdict seems biased and we no longer have faith in the judiciary. The judiciary has become a puppet in the hands of the government.

What do you think about the status of the media in these times?

There have been local journalists and small local media outlets who have worked to make the Hathras case a national problem. Unfortunately, the bigger media houses and the well-known journalists have not done their job. The mainstream media has undoubtedly become a puppet of the government.

It is so painful to see that almost every cornerstone of democracy, from the judiciary to the media to executives like a district judge, has been corrupted and turned into a mere puppet. In the Hathras incident, the cremation of the victim’s body at midnight without the permission of her family could not have happened without the involvement of executives such as the district judge.

In the absence of media showing what you are protesting for, how will this support and reach those who need to hear?

It was absolutely difficult to raise our voices when there was no media coverage. On the brighter side, however, there has been a surge in alternative media for the past few years. There are plenty of local journalists, smaller media outlets, digital media and those on YouTube and various social media websites who have highlighted the issues and are listening and making demands in the eyes of the public and the government. On a personal level, we also try to reach people through various social media platforms.

What impact and scope did these protests have?

Aside from Jantar Mantar in Delhi, which was the center of our protest, we also hold candle marches and rallies in different parts of Delhi and other states of the country. Many people from different sectors and citizens have joined our agitation. We have seen a good number of citizens take to the streets for this reason. A few days ago we organized a march in BudhhVihar in Delhi across from Jawaharlal Nehru University (JNU) and we are determined to continue our protest, however small it may be.

Since the anti-CAA protests in Delhi, many more people have joined our protest for a variety of reasons, most notably the violence and injustice that was committed against the victim and his family in this case.

There is no doubt that our path is full of struggles and we have a very long way to go, but thousands of people have joined us and this inspires us to continue our fight against systematic oppression and to speak up when necessary. We face many hurdles, but at the same time we hope to gradually make a difference.